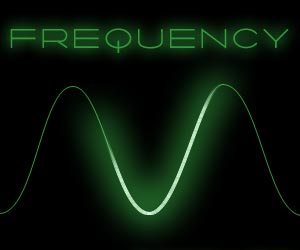 What is a frequency?

What is a frequency?

Well let?s look at one definition that applies best here to my subject. Physics says frequency is:

the number of crests of a wave that move past a given point in a given unit of time. The most common unit of frequency is the hertz (Hz), corresponding to one crest per second. The frequency of a wave can be calculated by dividing the speed of the wave by the wavelength.

There is a universal energy of frequency and vibration. Everything vibrates: This universal law states that everything in the universe moves and vibrates. Everything is vibrating at one speed or another. Nothing rests. Everything you see around you is vibrating at one frequency or another, all the time. So are we. Each person also has their own vibrational frequency. Some German scientists measured human energy many years ago using angstroms. They discovered that human beings usually vibrate at 450 million angstroms per second, but that that frequency can and does change at times. Some people have learned to change it at will, others do it by accident and at times it just happens

Some people can change their vibrational frequency at will such as the Tibetan monks, Yogis, etc. They do it using breathing techniques, deep meditation and focus. Some people do it accidentally. I believe our frequency can be affected by emotions, environment, physical health, and even our moods. I also think that everyone has their own unique frequencies that may even be responsible for our attraction to other people. Maybe like attracts like. Maybe we are attracted to others with a similar frequency, and at the same time repelled by others with a frequency that does not resonate with ours. Then there also seem to be certain people whose frequencies seem to go along with special abilities.

One of the main reasons I became so interested in this is because I was researching a rather strange trait that I myself seem to exhibit. I have always had problems with electrical things, electronics, and glass has been known to shatter in my hand, for no apparent reason. It happened again this morning. I was holding a glass coffee mug in my hand putting dishes away and it literally exploded into what looks like crushed ice. This has happened to me before. This is what is left of the mug: 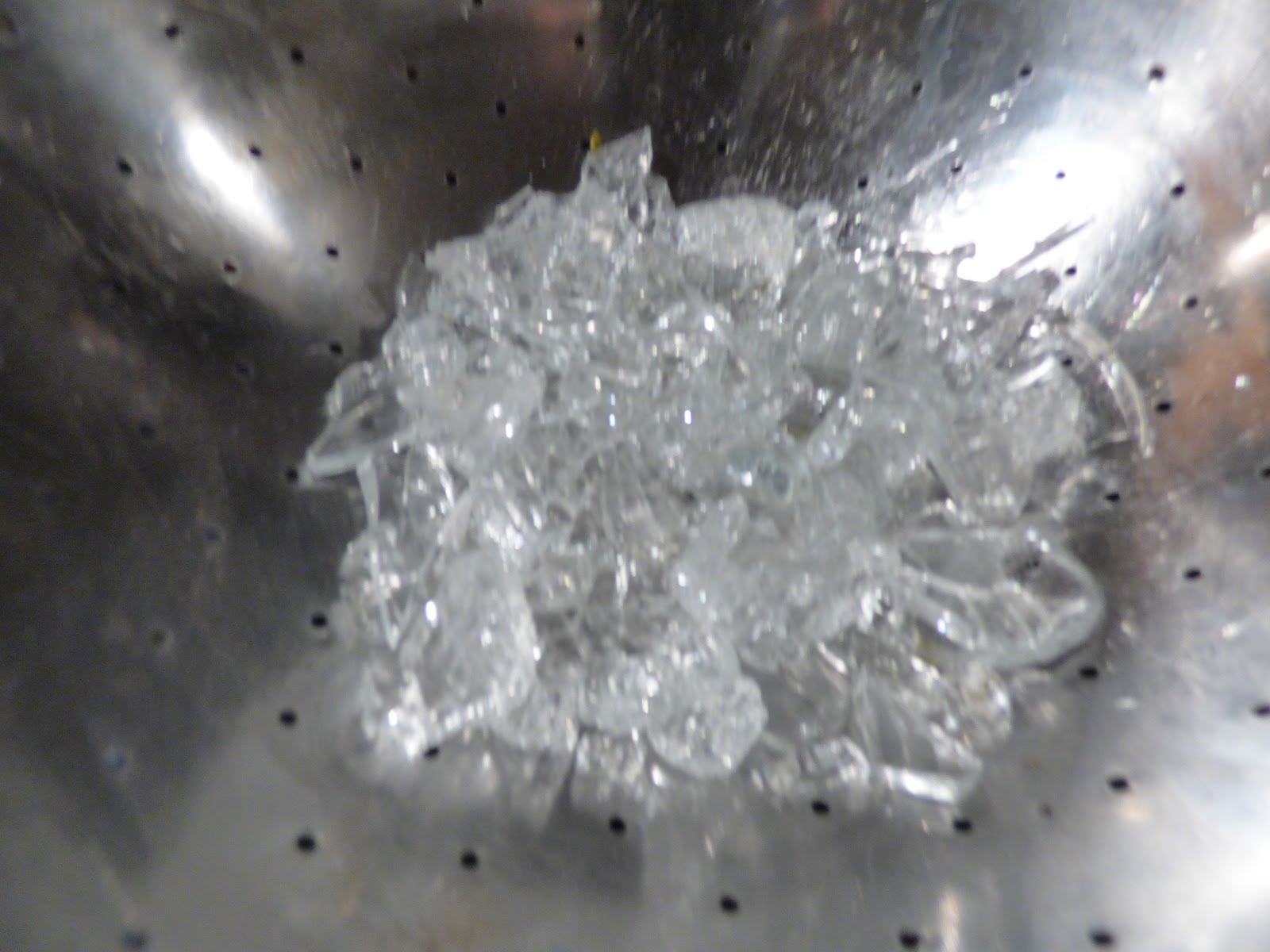 If you look at the close up you can see that the mug shattered and did not just break. There are tiny fractures all through each piece. 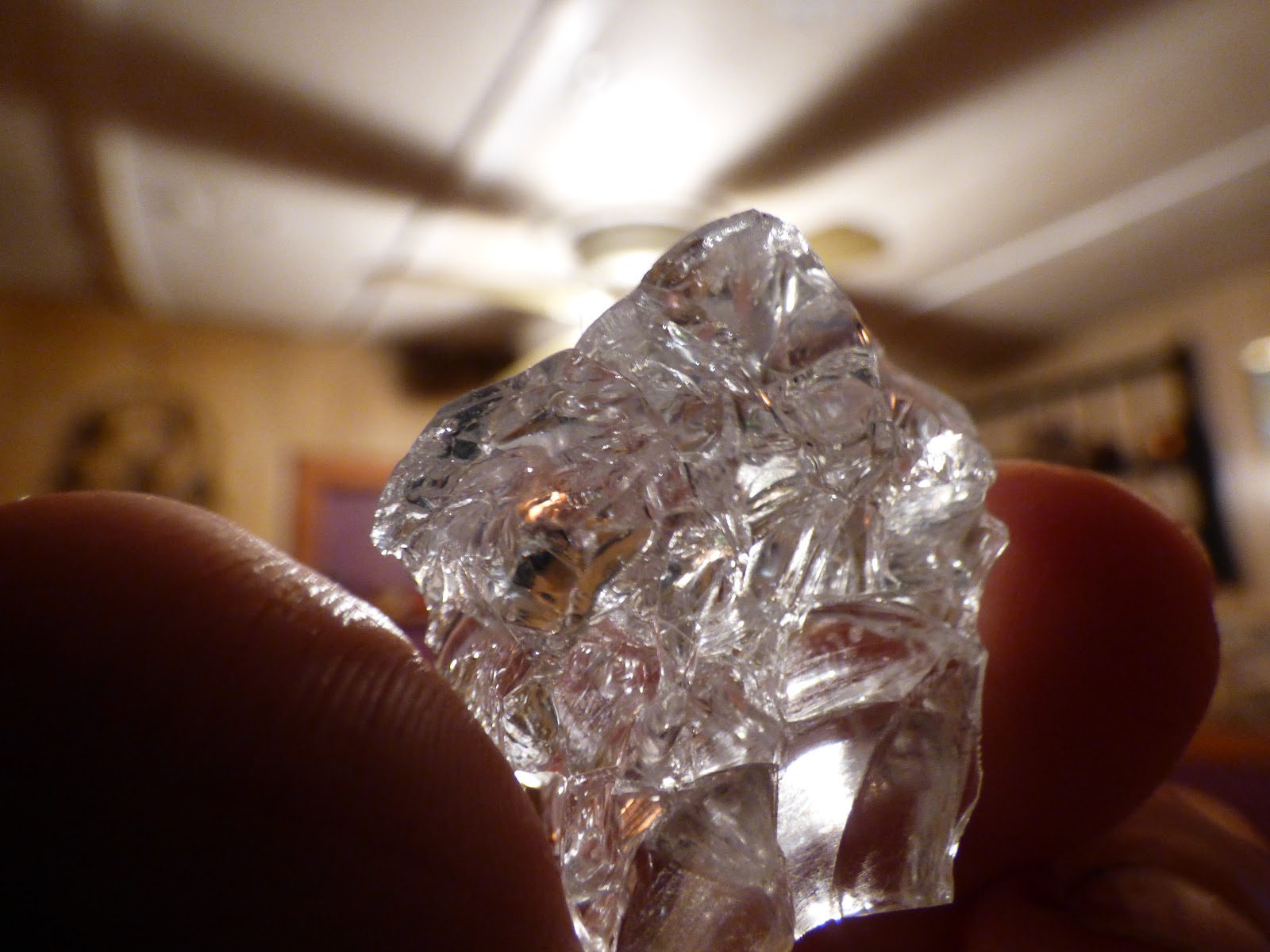 Nothing else was affected. The other glasses in the dish drainer and the cabinet were fine. Just the one I had in my hand at the time shattered. This and similar events happen to me all the time. China plates crack in half in my hand, glasses seem to explode into what looks like crushed ice, lightbulbs blow up when I throw the light switch. I seem to be especially dangerous around crystal glass, and lead crystal. I am not alone. I wrote an blog article years ago about this and got many comments from others who seem to have this same problem.

Decades ago, after a very intense experience with a spirit, I started looking into the paranormal. I discovered that spirits can and do communicate with me. I can take a tape recorder and get countless evp responses, some clear as a bell, others not as clear. At first I thought that everyone could do this. Later on I realized that I seemed to get more evp than anyone else and if I left a room during a session the evps slowed down to a halt. What is it about my energy that seems to feed this phenomenon?

Well now, older, wiser and with much more information and discovery under my belt, I know it is not my energy at all, it is my frequency. It was not me, that they was attracted to, it was my frequency. My frequency was conducive for them to create their evp. EVPS are created I believe by the spirit riding an existing sound wave or vibration wave, and creating constructive interference and mine seems to be a good one for them to ride. Perhaps that is why I was meant to do this kind of work. Maybe it is not so much a calling for me, but an inborn antennae of sorts that I have which serves as a conduit for attracting spirits and such.

There is so much that we simply don?t know yet about frequency and the role it plays in all things. It is something that is invisible to us yet so ever present. Tesla, one of the most famous inventors and scientists once said:

?The day science begins to study non-physical phenomena, it will make more progress in one decade than in all the previous centuries of its existence.?

I think he knew many things then, that we still have yet to figure out. The supernatural is a door that we have comfortably kept closed. I think we are finally starting to open that door, and daring to peer inside. Our progress is slow because in a way it is a scary endeavor. Scary because we are used to thing we can measure and control. The things that exist outside of those parameters, we, as human beings with a huge intellectual ego, tend to evade or deny the existence of. Sometimes the most educated among us are also the most fearful, when it comes to even considering a wider world, outside of their own grasp or understanding.

The paranormal, the supernatural, whatever you want to call it is one thing that we know very little about. There are no textbooks, no degrees, no pre-set rules to refer to in this study. This is why science ignores this field. Maybe too much education on the way we think things are is in essence a hindrance to studying these liminal subjects. Maybe it tends to foster a closed mind that will never even be able to conceive of such things. Maybe this is the one field where we can not rely on what we already know or think we know, to probe that which is as of now, totally beyond all that we have to work with. This is our new frontier. This frontier may be the most challenging as in this one, we can not feel the ground under our feet. This one requires our minds to step out onto thin air, not knowing where we will land.

Have you seen this kind of entity?
by pinellaspascoparanormal | 26 comments

What is the dogman and is it a real Cryptid?  While there haven't been as many sightings as there are of Bigfoot, this creature is being seen by people in different places all over the world and in the USA. Wisconsin has it's very own beast known as the "Wisconsin Werewolf", which Linda Godfrey has written a few books on, which you can find at Amazon. The "beast of Bray Road" is another book about the same creature. The sightings do vary though as far as description of this beast. Some say it walks on two legs some say it was on all fours. Some say it stands upright and has ears and a tail. Others say it has no tail but has ears. Some say it has a man's body with long arms, clawed hands,and wolf hind legs. All agree it has a muzzle and large teeth. Some bigfoot have been said to have a muzzle like face also, is that perhaps what people are seeing? from what I have been able to find in my research, many of these sightings have described this creature on four legs or squatting down eating or whatever. Is is possible that this is a large wolf or dog/ wolf hybrid of large size? When a domestic dog mixes with a wild wolf, you may have what they call "Hybrid vigor" which produces a much larger size animal as it's offspring. That might account for so called dire wolf sightings also.
The dogman seems to very popular in some states like Wisconsin, Michigan, Arizona, Arkansas,Texas, Illinois, Missouri, Utah, Idaho  and Ohio. There have been scattered sightings in other states and even here in Florida. This creature is even seen in cities and suburban areas, as well as rural areas. Louisiana has it's Rougaroo, which is said to be a wolf like creature also that is of tremendous proportions and very dangerous. Louisiana's Rougaroo is steeped in spiritual lore of the area and is said to be a spirit animal rather than  just a flesh creature. Many cultures have their werewolf legends and the dogman certainly fits in with those as well. So what does the dogman look like?
Until a specimen is caught and cataloged we may never know what the dogman is or even if it truly exists. It does not seem to be as common as Bigfoot and does not seem to leave as many tracks or other kinds of evidence. I have always been of the mind that since Bigfoot is purported to be part human that he also has the intelligence and the know how to camouflage, as well as disguises that aid him in hunting and staying off our radar. I feel this may also explain things like the supposed "Goat squatch", possibly just a bigfoot with a horned headdress from a kill. In examining kill sites I have noticed that skulls of large animals are often missing from the carcass dumps. Why?
Does the Dogman exist and if so is he in Florida too? Well, I am in the process of seeking reports and so far I have one: A woman I know, says she saw one.  Says she heard like a human-sounding howl and saw an extremely huge looking dog standing on its hind legs, by a tree ,out in the woods. This happened  by Lake Tiger, just out side lake Wales. This article is not finished and I will add sightings in Florida as they come in per my request.